by National Age
in Education
0

Meerut (Uttar Pradesh) [India]: For the students attending government schools in the district Meerut, an unique lab called “Aadharshila” that is equipped with technology, science, mathematics and space has been created to execute the National Education Policy-2020’s council education provisions. Where all of the science, math, and technology-related material will be provided in this lab in addition to the studies. Students will learn here in a hands-on manner, from coding to artificial intelligence, drone to robotics from planetary rotation to Newton’s principles, among other topics.

The force behind Adharshila believes that 21st century technology education is the key to success. But at the same time, not every student has access to the same opportunities for learning and development specially in villages.

They also want to make sure these students have the opportunity to learn new 21st century skills that will be useful when they grow up and enter the workforce. This lab was built especially for government school students in our district.

As part of the new national education policy, the government schools are now being equipped for technical knowledge instruction in addition to being decorated. The lab is started by the district administration or Meerut, a special lab relating to Technology, mathematics, science and space is now being constructed in the government school of Meerut.

With the help of advanced technology Adharshila lab will provide with the best way to learn about technology, science, and space. Students will be able to learn all about those topics in school using different working models and electronic devices. A dream wall concept is designed for students from which they will know about the possible career opportunities in they can build their future along with they are most of their topics like light, force, electricity, magnetism, lenses and sound with the concept of learning by doing. In addition to learning about temperature in chemistry, students will also study about batteries. 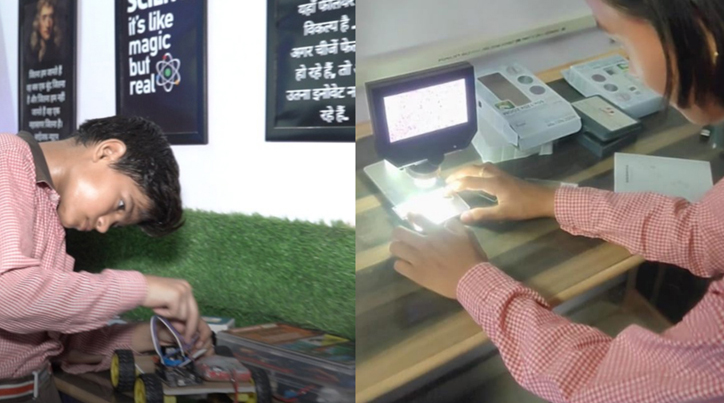 The idea behind Adharshila is to make sure every child in district has access to education regardless of their location or socioeconomic status. This way every child can get an opportunity for learning something new even if they don’t have access to books or computers at home.

Adharshila will also help students get interested in learning more about science technology as they are now learning by doing concept an early age when they are still developing their brains and bodies so they can develop into adults who know how important it is for them to learn more about science and technology today than ever before.”

Chief Development Officer Meerut Shashank Choudhary stated that Aadharshila is being created in this case so that kids in the village can learn everything that students studying in the metropolis learn.

He promised that the students would have comprehensive command over everything from arithmetic to coding, as well as the ability to absorb scientific and technological information with ease along with teacher are playing an important role to success this with upgrading themselves by different tech trainings.

The groundwork is being laid for the students to respond to their questions of curiosity while still studying. According to the CDO, there is a goal to educate the locals in addition to the students who are studying here. He claimed that efforts are made to ensure that other not just the govt school students even private school students learning in the government school which totally changed the image of government schools.

And take them one step ahead from the private schools, Currently 10 labs are running in different villages of Meerut in coming months goal to setup a lab in each government school of Meerut.

Adharshila in Meerut would help government village school students to realize their full potential in technology and science and build UP 1 trillion dollar economy state.

On the 24th & 25th of August at Marriott, Surat Hi life Exhibition is all geared up to once again turn Surat into a fashion heaven

Vineet Gupta, the founder of Ashoka University, thinks “One nation, one test” is a good idea if done correctly