by National Age
in Lifestyle
0

Books tell stories of what is happening around in the world. Be it personal growth, keeping a positive attitude or being compassionate towards the less fortunate in the society, an author has the power to propagate an idea from a nascent stage to its implementation into the public psyche. One such author, who recently received recognition at a rather tender age of 11, is Shivam Sharma Rawat, whose book, “Be the Change You Want to Bring”, was released on August 9, at the hands of Dr. Kiran Bedi, India’s first IPS officer. Dr.Bedi was all praises for Shivam while unveiling his book, which talks about the lives of domestic workers.

However, what is noteworthy is that this is Shivam’s second book. He has already written a book on how to be positive about tomorrow. His first book, “Be Positive Tomorrow Will Be Yours”, was released in 2021, by Police Commissioner of Delhi, Rakesh Asthana. As if that isn’t enough, Shivam is currently in the process of writing his third book, which would be on the man’s best friend, dog. 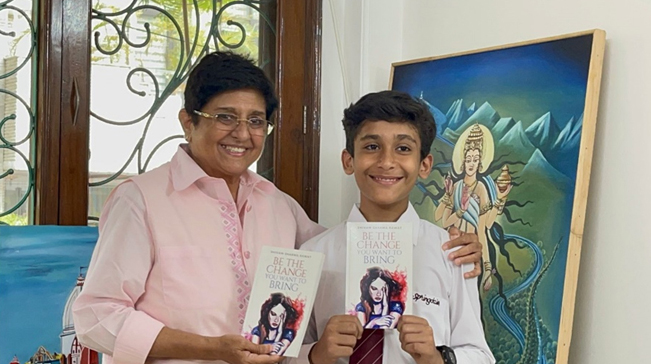 QUEST AMIDST LOCKDOWN By Cedric Coutinho

Studying at Springdales School, Dhaula Kuan in Delhi, Shivam is a multifaceted personality at such a young age. He plays Tabla, football and practices Yoga. Besides, he is also associated with social initiatives too. Some of these are “Each One Teach One”, “Hamara Samarpan Trust”, and “No To Child Labour.”

During the corona pandemic in 2020-21, Shivam also worked with a number of social institutions, bringing succour to the needy and the destitute. For his contribution, he was awarded the “Rashtriya Gaurav Samman” and was also nominated for the “Children’s Champion Award.” His work is also felicitated by the World Book of Records, London.

QUEST AMIDST LOCKDOWN By Cedric Coutinho

How to make the most of your time in Iceland

Sriram Sullia – is more than an RJ

Helper Coin is a faith-based asset